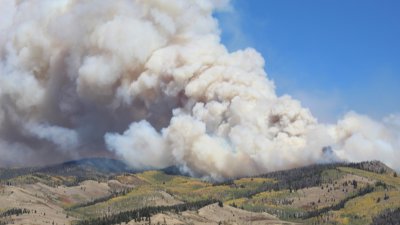 The 2019 Decker Fire ignited in the early afternoon of Sunday, September 8 in the Sangre de Cristo Wilderness, just two miles south of Salida, Colorado. Prior to the incident, it’s estimated the wilderness had an 80 percent tree mortality rate due to spruce beetle impacts and blowdown.

The fire was initially small, so the Forest Service allowed it to burn “to remove..high-risk fuels from the landscape for ecological benefit and to reduce the risk for catastrophic wildfire in the future.” Yet the abundance of fuels, combined with exceptionally dry weather, allowed the fire to grow to 8,500 acres in the following weeks. As of this writing the fire is only 30 percent contained.

As nearby communities face uncertainty, there has been intense debate whether the Forest Service should have immediately suppressed the fire.  There are strong opinions on both sides, but most people would agree it’s challenging to attack fires where there are heavy fuels, adverse weather conditions and virtually no forest roads, especially in steep terrain. But the restrictions placed on fighting fires in wilderness areas also made suppression more difficult.

That’s why it’s important for the public and policymakers to understand the implications of how designated wilderness areas influence firefighting and proactive forest management efforts, especially where federal forests and communities intersect- within the so-called “Wildland Urban Interface” (WUI).

Activities on federal lands designated under the Wilderness Act are highly restricted. The Act restricts permanent roads while expressly prohibiting temporary roads; the use of motor vehicles or any form of mechanical transport; motorized equipment or motorboats; the landing of aircraft; and physical structures. Even in the case of responding to wildfires, the use of chainsaws, dozers and other equipment are prohibited unless special permission is granted by agency leadership. Firefighters can’t safely attack fires without safe access, or the tools necessary for suppression.

There are currently over 111 million acres of federal land designated as wilderness, roughly the size of California. Thus restrictions under the Wilderness Act effectively take forest management tools such as thinning and mechanical fuels reduction completely off the table.

Active forest management can help contain beetle infestations, but we will never know if using these tools would have helped reduce the high rate of tree death in the Sangre de Cristo Wilderness and proactively reduce the intensity of wildfires near communities.

Every year legislation is introduced to create and expand designated wilderness areas, but adding additional layers of bureaucracy on firefighting and forest management on federal lands within the WUI is a recipe for disaster. For example, we are opposing a bill currently moving through Congress that would expand wilderness near Oregon communities that are at highest risk of wildfire.

There’s no doubt special places and ecologically sensitive areas deserve high levels of protection. And there’s no doubt many lands within the National Wilderness Preservation System deserve those protections. But caution is needed whenever arbitrary wilderness designations areas considered, especially near where people live, because we can’t protect and preserve what we can’t touch.