Note: The following is a news release from New Mexico Forest Industry Association 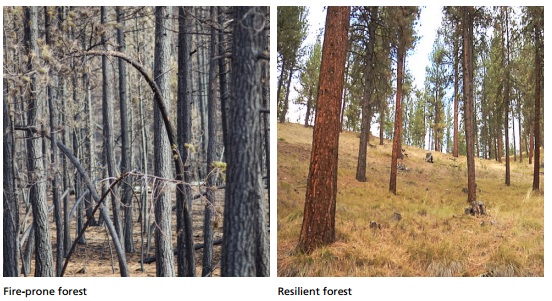 An ongoing lawsuit brought by a Santa Fe environmental group has led to the closure of several rural New Mexico businesses, threatening the long-term health of the state’s watersheds and causing a firewood shortage for the state’s most vulnerable communities.

The lawsuit, from WildEarth Guardians, alleges the U.S. Forest Service and U.S. Fish and Wildlife Service failed to adequately keep tabs on the Mexican spotted owl — which is listed as a “threatened species” under the Endangered Species Act. As a result of the litigation, a judge issued an injunction last September halting the commercial removal of any trees on millions of acres of Forest Service land in New Mexico.

While WildEarth Guardians has trumpeted the injunction as a “victory” over big, bad logging projects, the lawsuit is actually killing many of the small businesses that are critical for protecting our water and forest ecosystems from catastrophic wildfire.

“We’re going extinct,” said Jim Kellar, owner of K&B Timberworks, a Catron County-based business that’s been recognized for employing rural residents on important forest restoration projects. Kellar announced this week that he’s shuttering his business and laying off all of his employees after the WildEarth Guardians lawsuit locked him out of a forest restoration project on the Gila National Forest.

For Kellar, the pain of closing the business isn’t only the impact it will have on his employees. It’s also the impact it will have on other local businesses and the local tax base in one of the most economically-depressed counties in the state. And without businesses like his to do important restoration work, Kellar fears other industries, and the environment itself, will be hard hit as well.“We’ve had so much of our landscape here on the Gila devastated by major fires that if this trend continues for the next 20 years, if we aren’t able to do preventative work on the ground, most of these forests will burn,” Kellar said. “That would kill not only my business, but the hunting industry and the recreation industry here as well.”

Brent Racher, president of the New Mexico Forest Industry Association, said Kellar is one of several businesses that have already folded or are on the brink because of the WildEarth Guardians injunction. “The dominos of business closures have started falling and there is an increasing vacuum of forest restoration businesses as this injunction continues,” Racher said. He added that it’s especially hard to lose jobs amid the economic uncertainty caused by the pandemic. “These are mom and pop operations scattered across the rural areas of this state where there aren’t any other employment options,” Racher said.

Racher also pointed out that the extreme wildfires that his industry works to prevent threaten not only our water, our homes, and our forests, but also the very habitat that the Mexican spotted owl relies on to survive. “The biggest threat to these owls is catastrophic wildfire,” Racher said. “Killing the small businesses that are working hard to prevent those fires is the foulest thing WildEarth Guardians can do.”

Additionally, in the leadup to winter, the WildEarth Guardians injunction has prevented commercial fuelwood harvesters from collecting firewood on National Forest lands, leading to what’s shaping up to be a massive shortfall of wood in some of the state’s most vulnerable areas, Racher said.

While WildEarth Guardians has allowed a handful of forest restoration projects to be released from the court-ordered injunction, Racher said the organization is holding many environmentally-sound projects hostage in order to get more concessions out of the Forest Service without considering the broader impacts. He and others are calling on WildEarth Guardians to ask the judge to lift the injunction entirely while the organization resolves its differences with the federal agencies about how best to track owl populations in the future.

“Their beef is with the Forest Service, but they’ve knowingly allowed us to get caught in the middle of it.” Racher said.