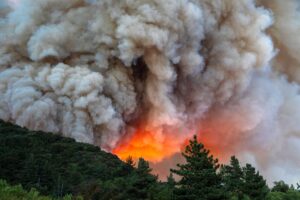 There’s no question western forests have an important role to play in addressing climate change. Healthy forests can sequester and store enormous amounts of carbon.  Setting aside federally-owned forests as “strategic” reserves for carbon storage- as some have proposed– is the wrong strategy.

It’s the wrong strategy because many of our western forests are not healthy. These forests are losing carbon due to high levels of tree mortality and wildfire. About 80 million acres of National Forest System lands are at risk of catastrophic wildfires or abnormal levels of insect and disease impacts and need forest management treatments.

Like congressionally designated Wilderness areas, “Strategic Forest Reserves” would restrict the use of active forest management tools- such as logging- under the premise these areas would “store the most carbon and help the most species.” The reserves would ultimately span millions of acres across 11 western states.

As a proponent claimed, “The key to this is that it needs to be permanent. That means you’re going to keep the carbon there. You’re not going to cut the forest. The high carbon density forests are mature and older forest.”

This argument suggests forested ecosystems are static, meaning if these forests are left alone, old trees will live and store carbon forever.  But as we’ve witnessed in recent years, this is simply not the case as climate-driven drought, insect infestations and disease have killed millions upon millions of trees.

Dead trees do not store carbon, they only emit carbon, and dead trees serve as fuel for severe wildfires that are emitting tons of carbon into the atmosphere.

Wilderness-style “protections” do not save older forests.  Wildfires in California this year killed nearly a fifth of the planet’s giant sequoia trees, including those protected within Sequoia National Park. And forests set aside for the purpose of “carbon offsets” are burning up and emitting carbon too.

One report found wildfires emit greenhouse gasses at a rate equivalent to 48 cars per acre. In this scenario, for every 21,000 acres burned, we’d need to take 1 million cars off the road and lock them in a garage for a year to compensate for the fire. Since dead trees only emit carbon, the research also found that the decay of the dead trees following a wildfire is more significant in affecting the climate than the fire itself.

Setting aside forests from active management, only to watch them burn in wildfires, wouldn’t help wildlife species either. For example in Oregon, 2020 wildfires burned over 560 square miles of suitable nesting and roosting spotted owl habitat. Of that, over 300 square miles are no longer considered viable for the birds.

Climate change requires actively managing our forests for mitigation and adaptation, as well as to maintain healthy, growing trees needed to remove carbon dioxide from the atmosphere.  Forestry also allows us to harness the potential of young forests that sequester carbon at higher rates than older forests. On average, one acre of new forest can sequester about 2.5 tons of carbon annually.

When timber is sustainably harvested, much of that carbon stays in the wood, lumber and other timber products indefinitely.  Removing dead and dying trees after a wildfire, and processing them into durable wood products, can help reduce the post-fire emissions that are contributing to climate change.

Active forest management is part of the climate solution because it helps keep forests healthy and maximizes their ability to sequester and store carbon. Restricting forest management and walking away from these landscapes, under the name of “strategic” reserves only ensures further emissions and more wildfires and dead trees.